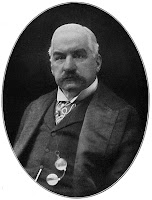 The Amaranth complaint against JP Morgan Chase is a fascinating tale of corporate intrigue and sabotage. Of course, we have a long way to go before we see if the allegations hold up.

I am summarizing the complaint here. In order to do that, I have simplified things. There are actually two Amaranth entities listed as plaintiffs and three JPMC entities listed as defendants. I will just refer to Amaranth and JPMC here. If you want to sort out all of the players, feel free to read the 30-page complaint.

JPMC served as Amaranth's futures commission merchant ("FCM"). In that capacity, Amaranth alleges, JPMC had virtually unfettered knowledge of Amaranth's trading positions in the volatile natural gas derivatives market. As Amaranth began to lose money in its natural gas portfolio, Amaranth began to suspect that JPMC employees might have been leaking information about its positions to other traders in natural gas derivatives, allowing the other traders to use that information to benefit themselves and cause Amaranth to lose money.

After Goldman Sachs bowed out, Amaranth claims that Citadel Investment Group agreed to essentially the same deal as Goldman Sachs. Amaranth contends that JPMC squashed that deal by speaking to Citadel and telling Citadel that Amaranth was not as solvent as Amaranth had represented.

When Citadel walked away from the deal, according to the complaint, JPMC stepped in and agreed to a trade with Amaranth to take on the bulk of Amaranth's natural gas portfolio. In the interim, Amaranth claims, it lost more than a billion dollars in that portfolio. In addition, Amaranth alleges that the trade with JPMC was on much more onerous terms than the deals it claims it had in place with Goldman Sachs and Citadel. The damages sought in this action could run into the billions.

This will most likely be a massive, high profile litigation, and it will have interesting implications both for hedge funds and their service providers as it shakes out. Is this a case of a desperate plaintiff looking for deep pockets? Or did JPMC really use the information it had access to in a way that damaged Amaranth? Stay tuned.