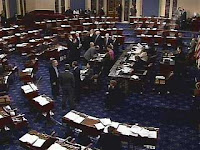 Just about to jump on a plane so I don't have must time to write up much of a summary here but two senators have propsed new legislature which would force hedge funds to register with federal securities regulators. There is a 90% chance that this quickly be approved:

The Hedge Fund Transparency Act, sponsored by Senators Carl Levin, a Michigan
Democrat, and Charles Grassley, an Iowa Republican, would require hedge funds to
file an annual disclosure form with the U.S. Securities and Exchange Commission,
comply with the agency’s record-keeping standards and cooperate with its
investigations.

“The problem is that hedge funds have gotten so big and
are so entrenched in U.S. financial markets that their actions can now
significantly impact market prices, damage other market participants and can
even endanger the U.S. financial system and economy as a whole,” Levin said...

“A major cause of the current crisis is a lack of transparency. The
wizards on Wall Street figured out a million clever ways to avoid the
transparency sought by the securities regulations adopted during the 1930s,”
said Grassley, who introduced a similar bill in 2007. read more