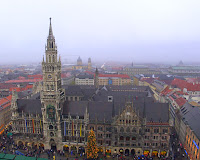 Here is a short collection of articles on the hedge fund industry in Germany. I am always looking for more valuable online tools and resources to add to these geographical hedge fund guides to the hedge fund industry. If you have a white paper or PowerPoint that I can include here please send me an email and I will post it for everyone's benefit.

German Market Growth Benefits from Master KAG Structure
An interview with Christian Benigni, one of the top three European hedge fund managers with approxiamtely USD 14 billion dollars under management, shared with readers his views on the propects and the potential future development of the German Hedge Fund industry.

Delivering Tax Transparency
When the new legislation governing alternative investment funds came into force in Germany in 2004. HSBC's Alternative Fund Services (AFS) took a two-fold approach to capitalise on the development of the market. On one hand, in partnership with its software provider, Advent Geneva, and with advice from PricewaterhouseCoopers, AFS launched a project to deliver tax transparency to their clients to enable them to distribute their funds in Germany.

The Evolution of Prime Brokerage in Germany
Since the introduction of the 2004 German Investment Act, there has been debate on the potential growth of the local hedge fund market, and on possible 'local' prime brokerage solutions. However, as well as domestic hedge funds, the legislation deals also with another important area: the regulation and distribution of 'foreign' (non-German) hedge funds. Furthermore, the related Investment Tax Act enables local investors to obtain favorable tax treatment on investments in foreign funds, including hedge funds.

Institutional Market Pised for Take-off
The change of the law in 2004 allowed hedge funds and funds of hedge funds to be launched under German regulations for the first time. Under the German rules, a Master KAG - service company for hedge funds - can take charge not only of the administration of a fund but its launch, registration and ongoing reporting, leaving the fund manager to focus on the investment management, marketing and the distribution.

Derivatives Take Larger Role with Hedge Funds
Surging flows of capital into hedge funds over the past few years have aroused fears that overcrowding in popular strategies will drive returns down and reduce the appeal of alternative investment approaches. However, the growth of sophisticated investment techniques involving the use of exchangetraded derivatives, with their high levels of liquidity and transparency, is offering managers and investors new opportunities to achieve higher returns, resulting in increased usage of futures and options worldwide.

Hedge Funds Liberalisation Starts to Bear Fruit
When Germany liberalised its rules governing hedge funds and taxation of their income at the beginning of 2004 the initiative was hailed in some quarters as a new dawn for the sector. If Germany, with its tradition of conservatism in investment choices and reputation for pernickety rule-making, could embrace hedge funds and funds of hedge funds, the argument went, the rest of Europe and other markets around the world would surely soon be following suit.