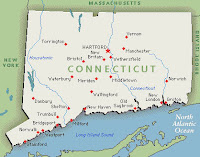 The state of Connecticut is home to hundreds if not over 1,000 hedge fund managers and they have recently proposed a series of new hedge fund regulations. This is the third largest center for hedge fund activity after New York and London and new regulations there could spread more funds out to Boston, NJ, Chicago, Florida and San Francisco. The combination of state level regulation and the elimination of the 15% carried interest tax treatment by Obama could push more funds to operate outside of the US. Here is a recent article excerpt on the proposed regulation of hedge funds in CT:

Connecticut lawmakers have introduced three bills that would impose state regulation over the hedge fund industry. The Hartford Business Journal reports that the proposed legislation would require each hedge fund to obtain a state license, provide for an independent annual financial audit and disclose fees and significant changes in management or management strategy. One bill would reportedly ban investments in hedge funds by individuals with less than $2.5 million in assets or institutions with less than $5 million in assets. source

Below please find an excerpt from an interview on this same topic:

Hi, John. The proposal getting lots of attention right now would ban investors with less than $2.5 million in assets or institutions with less than $5 million from investing in hedge funds. How big a change would that be? What are the current rules?

You can't actually invest in a fund unless you can prove you are a qualified client--someone with at least $750,000 under management with an investment adviser or at least $1.5 million of net worth to invest. There are higher standards beyond that.

Part of the reason for this (proposal) is the notion that there has been a retailization of hedge fund products. This bill is aimed at combating that. source

Review dozens of additional resources about hedge funds in Connecticut through our State Hedge Fund Guide on Connecticut.