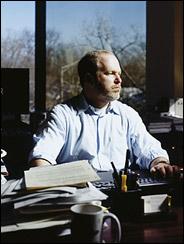 The following piece on AQR Capital Management, LLC is being published as part of our Hedge Fund Tracker Tool, our daily effort to track hedge funds in the industry.

Resource #1: (3.4.09) In what looks like a sign of the hard times in the hedge fund world, AQR Capital Management - one of the industry's biggest names - is opening its doors to the retail market.

In January, the investment management firm launched its Diversified Arbitrage Fund, its first mutual fund. Its Class I shares are up just 0.15% through the end of February, but that doesn't look so bad compared with the S&P 500, which dropped 12.5% during the same period. source

Resource #2: “One of AQR's Global Stock Selection funds, which uses borrowed money, lost 21 percent year to date, according to investors. The fund has less than $1 billion in assets. The pool has ``come under severe pressure'' resulting in ``shockingly bad'' returns for the fund and others with similar strategies, according to an Aug. 10 letter to clients from Clifford Asness, the firm's founder and managing principal. Asness blamed the losses on the ``strategy getting too crowded,'' rather than the models not working. (…)

AQR's larger asset-allocation fund was up about 3.5 percent in August, and the firm has received commitments for at least $700 million in new capital. AQR, based in Greenwich, Connecticut, manages about $10 billion in hedge funds. “ Source

The assets of AQR's Absolute Return fund dropped to $2.9 billion last month from $4 billion in the fourth quarter, said the people, who declined to be identified because the Greenwich, Connecticut-based firm doesn't publicly disclose the data. AQR's smaller Asset Allocation fund lost at least 16 percent of value. AQR offers two versions of the Asset Allocation fund. The first, managed to limit swings in value, lost 16 percent through Feb. 15. The second, which takes more risk, fell 25 percent. One of AQR's Global Stock Selection funds with less than $1 billion in assets has gained about 10 percent this year, according to an investor. “ Source

Based on what others in the business are saying, that statement might even hold true for the global $1.9 trillion hedge fund industry as a whole. After bracing for heavy losses, investors may be surprised to see the month wasn't as bad as feared when performance numbers come out early next week.” Source

Resource #5: AQR Capital Management LLC, one of the world's largest hedge fund managers, has seen a recovery in its flagship fund over the past week, regaining half of the 13 percent it had lost this month as of the opening of business on Aug. 10, its managing and founding principal Clifford Asness said in a newspaper interview.
Hedge funds have been under pressure in recent weeks, first from the meltdown in subprime mortgages and then as equities and other asset classes moved in unexpected patterns, confounding many funds' mathematical models. The AQR quantitative fund's recovery puts it at break-even for the year, Asness told the New York Times. Source

Below are details on Clifford Asness:

“It is Asness's essential belief that hedge funds -- or, rather, some hedge funds -- are doing things that are genuinely useful for investors, especially sophisticated institutional investors like pension funds and university endowments.”
Education :

Page 4: “He did well on his SAT's, which got him into the University of Pennsylvania, from which he graduated with degrees in engineering and economics.

He was then “Accepted into the Ph.D. program at the University of Chicago's business school, Asness found himself right in the middle of the ferment. When Fama and French were conducting their research on market efficiency”

Last paragraph: “By his second year in the Ph.D. program, Asness had become Fama's teaching assistant and had enlisted both Fama and French as his thesis advisers. For his dissertation, Asness had his own idea about testing the efficient market: he would take a look at a popular short-term strategy called momentum investing, in which an investor buys a stock for the simple reason that it is going up. In an early draft, he called it the ''fool's strategy.'' (Most day traders during the Internet bubble were momentum investors, for instance.) ''I was nervous telling Fama that I wanted to investigate momentum investing,'' Asness says now. ''But his reply was the best thing he ever said to me: 'Sure you can write it. If the data shows something interesting, then write it.' What Gene really believes in is empirical testing. Go where the data takes you.''

Page 5, paragraph 1: “Asness discovered that a large, diverse portfolio of momentum stocks also ''worked'' more than it should under the efficient-market hypothesis. There is usually some bad news associated with value stocks -- and investors assume there will always be bad news, so they avoid these stocks more than they should. As for momentum, people often get too optimistic about growth stocks and pay too much for them. In the short term, that enthusiasm will often drive the prices higher. But eventually the enthusiasm will wane, and the stocks will come crashing down.
''I think the market is reasonably close to efficient,'' he says, ''but there are a lot of little inefficiencies.''”
Beginning of his career at Goldman Sachs:

After grad school, Asness landed at Goldman Sachs, where he spent a year and a half trading mortgage-backed securities on the fixed-income desk while finishing his dissertation.

Then Goldman asked him to set up a ''quantitative research desk.''. (He) began building a model that would combine both Fama and French's value insight with Asness's momentum insight.

The computer model (he) developed -- and which, after many refinements, they still use today -- grabs a wealth of up-to-the-minute data to identify the cheapest value stocks (Fama and French), but only value stocks that seemed to have started on an upward swing (Asness). They buy a large block -- about 200 to 300 -- of those stocks. Then the model identifies stocks with the opposite characteristics: growth stocks whose rise is stalling. They sell an equally weighted amount of those stocks short.

The Asness portfolio is perfectly balanced between longs and shorts. That is what makes his fund ''market neutral.''

Asness and his colleagues soon discovered that the strategy they had come up with worked not only with stocks but with currencies, commodities and even entire economies. In time, they developed models that sorted out cheap versus expensive in all kinds of different investments.

In 1995, Asness's group started an internal hedge fund for Goldman partners and a few clients, using the new model. The fund did so well that the firm rolled it out and began to market it. Within two years, Asness and his crew had $7 billion under management.”
Beginning of AQR:

Page 1: “He started AQR, with three partners, in the spring of 1998, when he was 31 and had just walked away from a high-paying job at Goldman Sachs, where he was one of the firm's brightest young stars. During AQR's first three years, Asness and his partners didn't make much money. But by 2002, the firm was doing well, investors were clamoring to get in and AQR was managing about $3 billion in assets. (It's up to around $13.5 billion today.-2005.) »

Page 6: The four founders of AQR -- Asness, Liew, Krail and an ex-Goldman hand named David Kabiller -- set up shop in New York City in March 1998. They immediately set out to rebuild their computer model and to raise money. By August 1998, they had $1 billion committed, which at the time was thought to be the largest sum ever raised for a hedge-fund startup.

AQR during the .com bubble

Page 7: The fundamental insight that drove his model -- cheap beats expensive more than it should -- simply didn't work during the Internet bubble. Expensive wasn't just beating cheap. It was crushing cheap. Outrageously expensive tech stocks just kept getting more expensive. During the height of the dot-com era, the fund fell about 20 percent.

By early 2000, he began to write a lengthy article exposing what he saw as the fallacies being used to justify crazy stock prices. It was unlike anything Asness had ever written. It was biting, sarcastic, tough-minded and occasionally even funny. He laid out the math for why even the stock prices of strong companies like Cisco Systems were not sustainable. He called the paper ''Bubble Logic.'' (…) But it was never published. There was no need to publish it. Asness says that if the bubble had lasted six more months, he would have been out of business. But it didn't. He had outlasted it.” Source